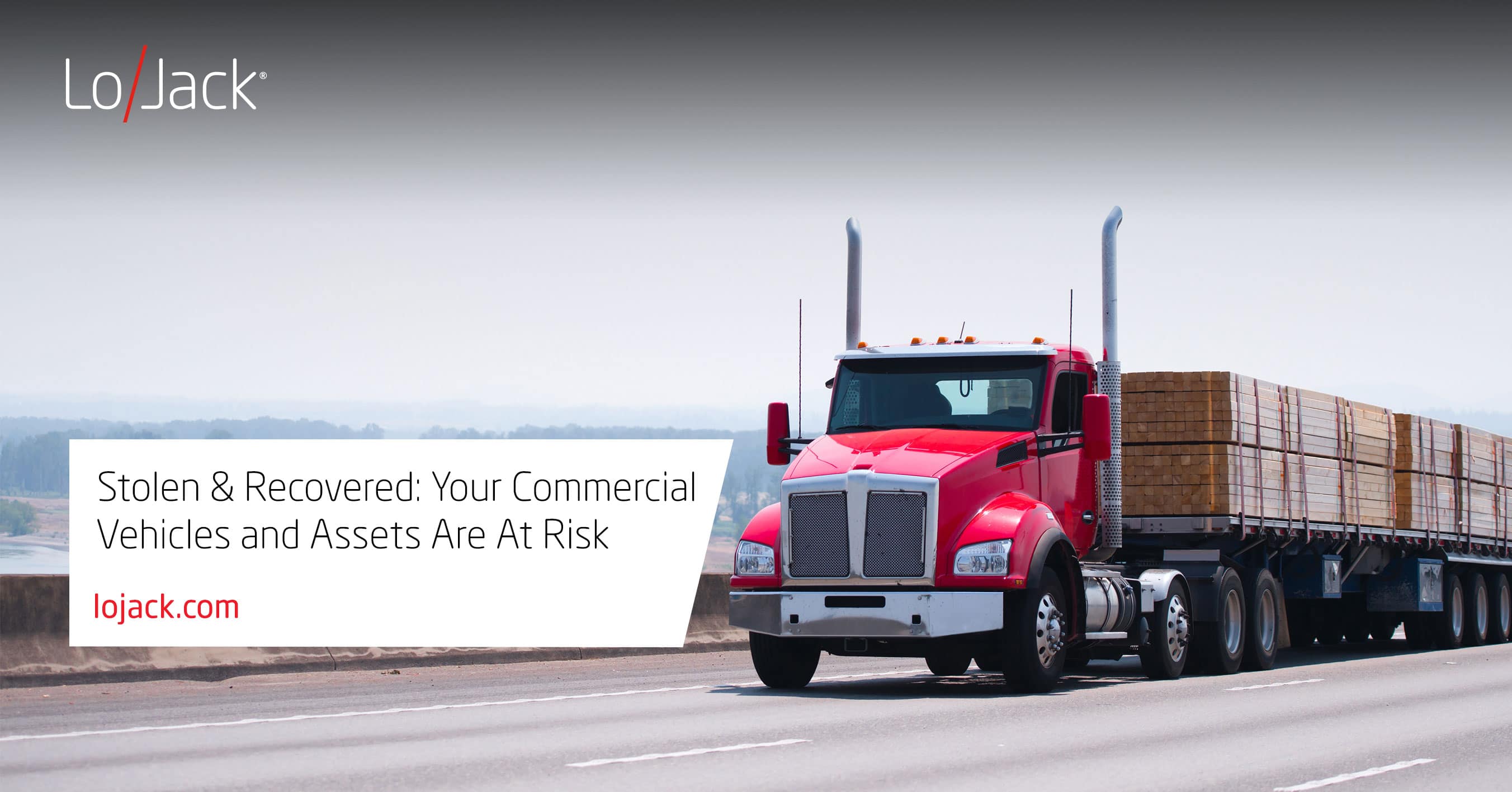 While the annual LoJack® Study on Construction Equipment Theft focuses on heavy equipment, other commercial investments are at risk as well. Large construction sites often use UTVs, or off-road vehicles, to move people and supplies around the grounds. Heavy- and medium-duty trucks as well as trailers are a common sight in work zones. A not very common sight, recreational vehicles (RVs) fall under commercial because they require the ruggedized LoJack® solution. The 2017 Construction Theft Recovery Report showed that trailers and RVs were the fourth (6%) most common type of equipment stolen, while UTVs (5%) rounded out the top five.

Commercially used vehicles are not included in the study, though they are industry workhorses. They range from heavy- to medium- to light-duty or semi-truck size to your traditional pickup. The vehicles are popular. For example, Transport Topics notes, “U.S. retail sales of medium-duty trucks rose 13.7% in May [2018] to 20,801, driven by large gains in demand for Class 6 trucks, a highly competitive sector.” It is not uncommon for trucks, trailers and equipment to be stolen together. Now, onto the recovery stories covering these commercial vehicles. 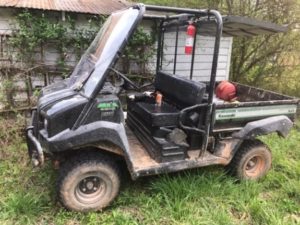 The owners of a 2017 Kawasaki Mule reported it as stolen to Henry County Police who verified the theft and entered the vehicle information into the state and federal crime computers.  This routine action automatically activated the silent LoJack® System concealed in the Mule.

Within minutes, a Deputy with the Henry County Sheriff’s Office picked up the signal with the LoJack® Police Tracking Computers (PTCs) installed in patrol vehicles and aircraft.  Following the directional and audible cues from his PTC, the Officer tracked the vehicle to an area close to where the theft occurred. The vehicle was behind a residence. The residents were not cooperative with the Deputy and an Investigator was called to the scene. While at the residence, the Deputy also located a 2013 Toyota 4 Runner reported stolen out of North Carolina. Both vehicles were recovered and impounded. The investigation continues with several suspects identified at this time. 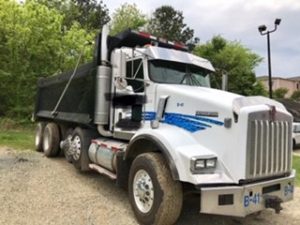 The owner of a 2005 Kenworth T-800 dump truck contacted the Granville County Sheriff’s Office in Oxford, North Carolina to report it as stolen.  They stated that an employee and the truck had not been seen or heard from in several days.  After many unsuccessful attempts to contact the employee, the owner decided that filing the report was his best option.

After the Kenworth Truck was entered into the national crime computer database, Agents with the North Carolina Division of Motor Vehicles License and Theft Bureau in Graham, NC picked up the silent LoJack® System signal from the vehicle.  They found the dump truck was located in the parking lot of a restaurant.

The Agents spoke to employees at the restaurant and were informed that the truck has been in the parking lot for four days.  The Kenworth was returned to the owner and the investigation led to the employee being charged with the theft of the truck.  Further investigation showed that the employee has a substance abuse addiction and was currently out on bond for attempted murder in an unrelated incident

The owner of two Ford F250 pickup trucks contacted the Providence Police Department (Rhode Island) to report vehicles missing. Both were short-term rentals that were not returned as scheduled and the renters did not respond to phone attempts to contact them. After the LoJack® System activated, the Providence Police picked up the silent signal.  The Massachusetts State Police and the Rhode Island State Police also tracked the first vehicle.  The Rhode Island trooper located it in a commercial parking lot and the unoccupied vehicle was recovered. 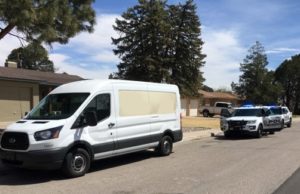 Officers tracked and located the stolen Ford parked in a residential neighborhood along the curb.  While officers were conducting their recovery investigation, a concerned citizen contacted them and advised them of the named offender currently lives in the neighborhood and pointed out which house. This residence was not the address the offender used on his rental contract.  Officers made contact at the residence and the offender answered the door and stepped outside.  During his interview, he claimed he just recently renewed the rental agreement; however, this was not the case.  The offender was also found to have active warrants and he was subsequently arrested.  The offender was booked into the Metropolitan Detention Center and the van was returned to the business. 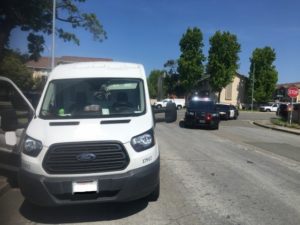 A commercial home improvement store contacted the Fremont Police Department to advise one of their rental vehicles stolen from their parking lot in the early morning hours. After activating the LoJack® System, the Officers were directed to the stolen 2017 Ford Transit Van in a residential area, where it was observed being driven by a male suspect.  The stolen vehicle was followed until sufficient backup units were in position, and a traffic stop was then made on the stolen van.  The suspect was taken into custody without incident. He was well known to the officers from prior contacts. The undamaged stolen Ford van was recovered and towed/stored for safe keeping to be returned to the business. 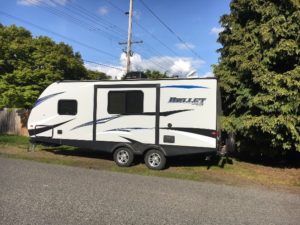 The owner of a 2019 Keystone Bullet travel trailer left it with an RV dealership for maintenance.  Thieves prowled the trailer parked on the lot sometime during the night.  During recon, the thieves discovered keys to a 2016 Ford F-150.  Paperwork inside the trailer provided an address for the Ford F-150 and the thieves took full advantage of the information.  The Ford F-150 was then stolen from the owner’s driveway and ultimately used to steal the 2019 Keystone travel trailer back at the dealership.

When the owner discovered the theft of the Ford F-150, he immediately called the Everett Police Department. Within seconds of the activation, a detective with the SNOCAT Auto Theft Task Force received an email alert regarding the LoJack® System activation.  He deployed his portable Police Tracking Computer (PTC-T) assigned to area task force detectives and immediately received a LoJack® System hit. The detective verified the hit was coming from the stolen Ford F-150 and was able to track it being actively driven by the suspect. The truck and RV were located occupied in the area of Marysville. Detectives took two suspects into custody and booked them into the Snohomish County Jail for Theft of a Motor Vehicle 1st Degree and Theft 1st Degree.

The owner of the Ford F-150 and Keystone trailer received both vehicles back within just a few hours of the initial theft and before they could be sold, destroyed or hidden amongst the vast undeveloped properties in Snohomish County.

These recovery stories highlight the hard work that law enforcement does daily. We thank them for their service especially when they capture career criminals in the process. It helps make our communities safer. For more information on the LoJack® Stolen Asset Recovery solution, please visit our solution page here.