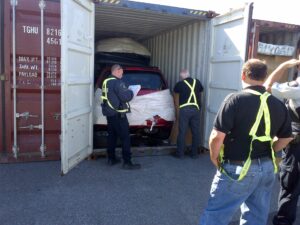 LoJack announced today its participation with the international crime ring investigation Project Windows. The operation included collaborative efforts between Canadian Law Enforcement, United States Homeland Security and Canadian Border Services, who each played a key role in tracking the group of highly-skilled criminals responsible for stealing more than $5.4 million in vehicles as part of an organized crime ring.  Fraud and stolen identities were used to obtain the vehicles.

These sophisticated criminals stole from high-end vehicle dealerships in Canada using falsified documents and fraudulent identities and transported them across the border to United States ports including Newark, New Jersey and Baltimore, Maryland. Vehicles were then placed in cargo containers and shipped overseas to Nigeria and Ghana. The York Regional Police began the investigation and enlisted the aid of LoJack in the investigation.

With the cooperation of LoJack’s Canadian Law Enforcement Team, LoJack provided several covert vehicle tracking devices to law enforcement that were placed inside some of the high-end vehicles stolen by the theft ring or being utilized for criminal activities. The LoJack devices helped investigators gather intelligence on the suspects and their accomplices, follow the trails of stolen vehicles, establish or confirm their plans and gather evidence against the members of the organization.

“These highly trained thieves were employing sophisticated methods and fraud to purchase and transport vehicles across borders and overseas, which meant that tracking their every move was essential in making the bust,” said Randy Ortiz, CEO and President of LoJack. “LoJack partnered with law enforcement officials in Canada to supply covert tracking devices and intelligence that would provide details on where and when a planted vehicle was moved. This allowed investigators to trail the stolen vehicles, recover the assets and build a comprehensive case that eventually led to the arrests.”

Over 89 High End Vehicles Recovered Worth an Estimated $3.2 Million

Over the course of the investigation, The York Regional Police Department was joined in the case by Toronto Police Service, Peel Regional Police Department and the United States Department of Homeland Security. As a result of this highly sophisticated band of criminals, 124 high-end vehicles were stolen totaling an estimated $5.4 million in assets, including models from manufacturers such as BMW, Mercedes, Acura, Honda and Range Rover. The involvement of LoJack contributed to the recovery of 89 vehicles worth an estimated recovery value of $3.2 million.

“Today’s thieves are sophisticated and dangerous criminals capable of stealing millions of dollars in assets,” said Ortiz. “We are extremely proud to have contributed to the success of this major investigation, which resulted in the arrest of 16 suspects with more than 236 fraud-related charges pending.”

For non-emergencies, please email us at:
lawenforcement@spireon.com